My partner Sam and I moved from Missouri to Colorado nearly three years ago.  We procrastinated on packing, and ended up pulling two all-nighters in a row, emptying out our apartment and setting out in our cross-state U-Haul-pickup-truck caravan, let’s just say, later than we’d planned.  And though I remembered packing it, distinctly remembered placing it in a larger box that held a bunch of other random stuff, one thing that never turned up in the unpacking process was the shoebox I’d had since college, which contained all of my most treasured souvenirs of my travels, beginning with the year I studied abroad in Spain — postcards and small artworks,  bumper stickers, poems, and newspaper clippings, the things I bought or collected to remember places and times, when I was traveling on a very tight budget.  Then there were some love letters, some scenic pictures from calendars, and possibly a scrap of fabric from a certain Taco Bell flag that was minutely vandalized during a statement against cultural imperialism.

During those three years in which the box was missing, I was of two minds.  On one side, I thought I should not be attached to things, even those gathered with passion and tenderness, as presents I bought myself to celebrate moments of perfect contentment or exquisite bittersweetness.  I had a surprising degree of success with this.  I felt wistful but accepting when I thought that the collection was lost for good; even this outcome had a certain romance to it.  But maybe I had such an easy time accepting the box’s absence because, on the other side, I never really stopped believing that it would be uncovered yet, nestled down in some yet-to-be-unpacked box.  (Yes, even after three years, there are such boxes in our house.)

Well, long story short, I did in fact finally find it the other day, and was reunited, with great joy and delight, with a relatively small but personally important bunch of markers from my own history.  And I thought it was interesting that I found this right after I was writing the last post, and going back and actually thinking about the insanity, and also the survival, and also the fun and the learning of those years.  The hands that gathered these mementos, the eyes that selected them, are similar to and different from those with which I see and touch the world today.  I am still in a process of reclamation, of gradually becoming able to face and meet all of those parts of myself that I’ve denied, been afraid of, run away from.  I want to reconnect the electricity flowing to the creative and strange and engaged parts of myself that have shut down for various reasons over the years.  That’s my vision and intention for spring rebirth.

What would Wellstone do, indeed??? 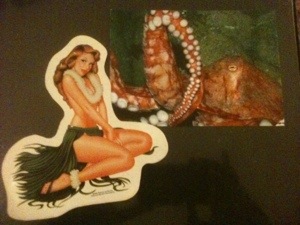 I stand by both of these.

My big shopping splurge was in a department store in Bilbao, where I bought A TON of tourist stuff that said Euskadi or had the Basque flag because I was totally in love with the Basque Country. … That’s just the kind of nerd I am. 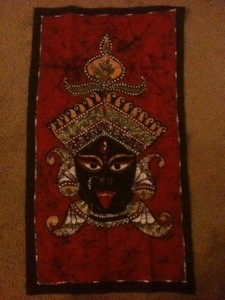 I received this cloth painting of Kali as a gift at my graduation/30th birthday party — then she was lost for three years. I guess it’s time to really welcome her ferocious energy in! Where will it take me? Let’s go!

Because You Know You Want To See My Tweets